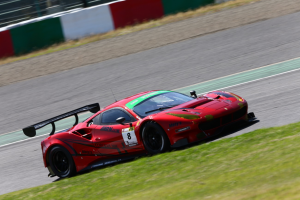 On June 10th, the Super Taikyu Round 3 qualifying was held, as well as a second chance race. Conditions were dry and optimal with sunny skies, 27ºC air temperatures, and track temperatures of 37ºC. After the qualification race, teams which failed to qualify had a consolation “Second Chance 100” race lasting 100 minutes. The three cars at the back end of the grid during qualifying from each class participated in this race as well as the slowest teams that were unable to make it in the final race. Retirement of cars and mechanical issues will be a fatal factor for all teams. It was a tough battle for the ST-3, ST-4, and ST—5 class in the qualifying and “Second Chance 100” race due to the many teams involved and the differences in performance are close.

Attention focused on the #1 Three Bond Nissan JIDOSHA DAIGAKKOU GT-R. It had now been given a 60kg weight handicap, the heaviest handicap of all the Super Taikyu cars. With three minutes left on the clock and Uchida behind the wheel, the GT-R finished qualifying in 3rd place with Fuji, the B driver, taking fourth place advancing into the finals. The final result for the ST-X Class Qualifying was the #8 ARN Ferrari 488 GT3 taking pole position with Sasaki, B Drive, setting a new course record with a 2’00’764. 2nd place went to the #99 Y’s distraction GTNET GT-R and third place was #777 D’station Porsche. #89’s B driver, Yoshimoto, stopped at the DUNLOP Corner immediately after the pit-out as he could no longer do attack laps. Thus, prompting the #89 car to enter the consolation “Second Chance 100” race.

All cars had difficulties in this car. In the early part of the race #89 stopped at the second corner. When the #89 car returned to the track, its pace didn’t improve. Meanwhile, the #999 Lamborghini Huracan went into the gravel and received two drive-through penalties. Toward the end of the race, the #112 SLS AMG front left tire exploded. #112 and #999 overcame their problems and advanced to the final race. 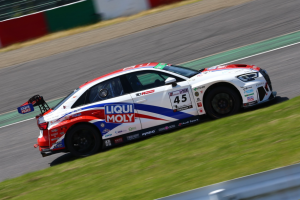 In this car, 5 machines showed up to the qualifying race with #10 as a new entrant. The #97 and #98 Modulo Civic TCR were loaded with 60kg weight handicaps. #97 with Keichi Tsuchiya attracted a lot of attention in this race. It’s Tsuchiya’s first official race since 2003. He showed his skills and made good result finishing in 3rd position, behind the #45 LIQUID MOLY RS3 LMS ins 1st and #10 VW Golf in 2nd on its first attempt. 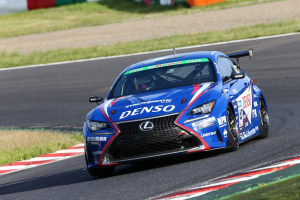 #18 Y’s distraction Toyota 86 had mechanical issues but managed to finish the race. However, #18 couldn’t enter in the final race. #26 ENDGRESS ADVAN TRAST Vitz and #100 AGENT-1 Toyota 86 advanced to the final race. 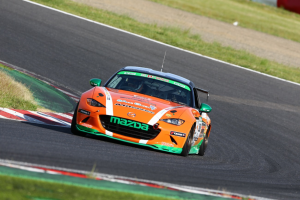 #37 DXL Alagosta NOPRO Demio SKY-D had a mechanical problem and couldn’t run on the qualifying race. It also never showed up on the gird of the “Second Chance 100” race. During the middle of the race, #213 WAKO’S Field HPI WM Vitz crashed at the DUNLOP Corner forcing the safety car to come out. #213 was unable to rejoin the race. #37 had to retire while #213 was given the opportunity to participate in the final race.